Gear ratios. Nobody likes to admit talking about them. Itâ€™s that age-old stereotype of why weâ€™re all hopeless sexual failures with adenoid problems and pale, viagra sale clammy hands. Thereâ€™s a good chance Iâ€™m throwing away any chance I had of meeting a nice girl by just writing this piece. But the dirty secret is that we all end up doing it sooner or later. Even the most forthright alpha (fe)male will sooner or later catch themselves asking a friend which chainring size or sprocket spread is the best one for them. Why? Because, viagra 40mg despite all this, theyâ€™re important. 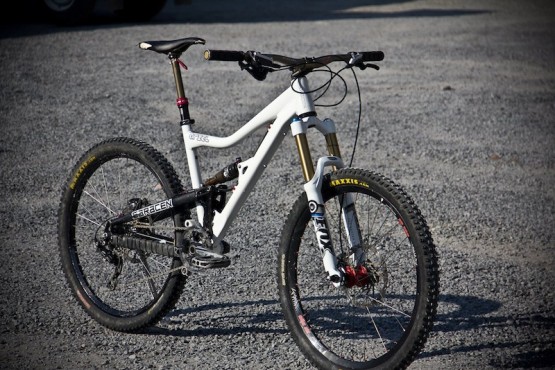 One way or another, having the wrong gears on your bike will ruin your ride. If youâ€™re racing DH it can be the difference between being able to put the power down when you most need it, or being stuck cruising down. For 4X itâ€™s your gate and sprint gone. And on a long pedal it can turn a gentle ride into a mission of pain.

So when The People That Decide These Things in the mountain bike industry introduced ten speed there was a collective groan from riders everywhere who had been hoping to get laid.Â  Amid the relentless rain of press releases and technical explanations once happy people retreated to internet forums and started threads with titles like â€œDo I need ten speed?â€ and â€œOMG anuther gir on mi bike!â€ There were inevitably people proclaiming that we should never have changed from eight speed, or that they still use an Archer Sturmey three speed setup from the mid-1970s and canâ€™t understand why we all donâ€™t.

Donâ€™t panic gentle reader, take my hand and letâ€™s have a stroll through this ten speed business. I promise we wonâ€™t talk about 1:1 ratios or other equally obscure numbers, mainly because I canâ€™t be bothered to do the maths and the numbers mean fuck-all to me out on the trail. Weâ€™re also going to avoid looking at anything other than a single ring at the front. Simple bikes are better and a front mech is another thing that can go wrong, where modern chainguides are more or less idiotproof.

While bike companies are concentrating on 2 x 10 setups, they seem to be missing 1 x 10, which is a shame as the real potential for ten speed seems to be there. And letâ€™s not mention Hammerschmitt at all. To come to these, slightly rambling, judgements Iâ€™ve spent six months hammering a Sram X9 setup and a Shimano SLX/XT mix and riding big mountains day-in, day-out (I know itâ€™s a hard life sometimes). On the more down-the-hill-type bike I ran a 32-11 block with a 36t up front and on the trail bike a 34t ring up front and 36-11 out back.

Weâ€™ll start with downhill, 4X and any other type of riding you happen to do thatâ€™s mostly gravity-based. The answer here is simple – meh. Ten speed is neither here nor there. The slightly closer ratios youâ€™ll get with a ten speed setup quite honestly donâ€™t make much difference, and as more and more people head towards weird, tiny setups with only a small handful of gears youâ€™ll probably see ten speed disappear from more specialist bikes in the coming years. However, and hereâ€™s the big but, donâ€™t be put off by it either. If youâ€™re looking at full bike that comes with a ten speed setup, go for it. After six months of hard abuse on big alpine trails Iâ€™m struggling to separate nine and ten speed for durability. Sure a couple of mechs got torn apart and a chain twisted, but things go that way some times. To get down to the fine level of detail youâ€™d need to make a verdict one way or another youâ€™d have to abandon any hope of ever having another sexual encounter.

And trail riding? This is where ten speed really comes into its own, but you also run headlong into the problem of what combination to run and find yourself having those dreaded conversations about ring and sprocket sizes. Can you feel those hairs starting to sprout on the palms of your hands just thinking about this? Fortunately the answer isnâ€™t in those ratios we touched on before, it comes down to something far more basic, far more brutal: determination. You should choose your gears based on how hard you want to go.

As a starter, you wonâ€™t go too far wrong with an 11-36t block. For my money these are the real point of ten speed â€“ wide range cassettes without huge gaps between the gears and the 36t sprocket makes granny gears redundant for all but the weakest of riders. So letâ€™s take that as a constant, you can get similar resistance gears from other combinations, but if youâ€™re looking for a closer spread of gears Iâ€™m not sure I want to go drinking with you. Now the chainring becomes the big question and itâ€™s here you need to ask yourself how hard you want to push.

Our rough rule here in the Alps is 34t up front will do pretty much everything but the real steepest ups, but on longer rides (40km+) it does take more out of you. On the climbs you do have to put some power down and you canâ€™t generally just cruise up a hill, but for most people that will probably simply take a little getting used to. If this doesnâ€™t sound like your cup of tea or if you are doing real distances, drop down to a 32t at the front. Those two less teeth make a real difference and youâ€™d be hard pushed to find any real difference between that and a more traditional granny gear. If you go below a 32t ring youâ€™re going to struggle to find a chainguide that will work for you. On the other side, how big you choose to go is all your call. Itâ€™s simply a question of how much pain youâ€™re prepared to put yourself through.

Iâ€™ve seen talk on the internet of people spinning out because a 34t ring and 11t sprocket just isnâ€™t big enough for their manly pistons of legs. If you really are lucky enough to be in this situation, congratulations! But really, you have to suspect that this machismo is mostly there to help these people make peace with their egos, because theyâ€™re spending their time internet talking about bicycle gearing. If we get down to it and youâ€™re frequently spinning out on your trail bike, youâ€™ve obviously got enough power in your legs to run a bigger chainring. Or stop pedalling so much, itâ€™s supposed to be fun.

So there we go, a (very) rough guide to ten speed: it works and on a trail bike it is actually a very good thing. Thereâ€™s not much else to say to sum it up. If youâ€™re wondering Sram or Shimanoâ€¦ Well Shimano have slightly more adjustment on the barrel at the shifter, which is good with the precision of the shifting, but Sram still feels so good when you change gear.Â  Your call. Iâ€™m off to the bar to go and talk to the pretty barmaid and try and convince myself sheâ€™s not just flirting with me because itâ€™s her job until Iâ€™ve forgotten all about writing this.