This bike press release came our way and as it starts in Italy we thought it would be good to publish a bit of info about these guys and their aim to ride to the UK from Italy for charity.

UK Brothers, doctor Scott and Rhys Jenkins, bronchi who completed a 2000 mile run from Boston, MA to Austin, TX in 75 days in 2010 for charity have set their eyes on their next ultra endurance challenge – To cycle from Turin, Italy to Tiger Bay, Cardiff in just 10 days (aptly named the 1000TT).

The brothers have recruited two friends and keen road cyclists, David Thomas (30) from Wales and Kris Lindsay (27) of Scotland to embark on the astonishing 1,100 mile cycle across Europe from Turin, Italy to Tiger Bay, Cardiff to raise money for MacMillan Cancer Support and Dumfries & Galloway Endowment Fund. This audacious charity endeavor will see the men attempt to cycle over 100 miles a day against varied and challenging French, Italian, Swiss, and British terrain and will be accompanied by varied climates. Their aim is to cycle for 10 consecutive days to reach their goal end date of June 12th 2012. The idea for the cycle was sparked by their growing admiration for the bravery of friends and relatives who fought and lost their fight with cancer. Starting on June 3rd 2012, the four friends will leave from Turin, Italy and continue on the remarkable 1,100 mile cycle, arriving at Tiger Bay, Cardiff on June 12th 2012.

The challenge ahead for Scott, Rhys, David and Kris is a grueling one, and one which will see the friends push themselves to their physical limits. They will be cycling through 5 countries, 50 towns and 5 cities. The climate will be constantly changing, tackling mountain climbs and valley descents along the way. The route will incorporate 4 of the steepest inclines from the Tour De France and also take in the Olympic sites once London is reached.

Rhys Jenkins said: Being able to take in the Olympic sites as part of this endeavor will be fantastic as it will get me even more excited than I already am about carrying the Olympic torch this year.Â  I canâ€™t wait to get out there. Itâ€™s going to be an intense challenge but to know that we could raise money for those who need it makes it worth it.

Scott, Rhys, David and Kris will need to consume between 7,000 and 10,000 calories a day just to ensure that they maintain peak physical condition and optimum energy levels over the cycle.

Dumfries and Galloway Health Board Endowment Fund is a charity which is composed of over 240 funds which are raised for the benefit of patients and staff in Dumfries and Galloway.Â  An example of one of the individual funds collected for by the Endowment Fund is the Alexandra Unit, a specialist palliative care unit. The principle aim of the unit is to enhance the quality of life of patients based there on a day-to-day basis.

A few links about their challenges. 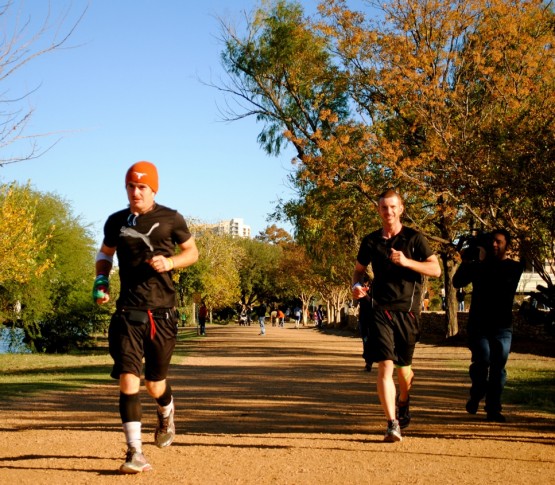