Andy Bell is best known for staring fear in the face on a childs tricycle. Heâ€™s one of the original crew on the MTV series (and soon to be 3D film), Nitro Circus. Although the tricycle may be small, the ramps he hits on it definitely arenâ€™t. And as for the backflips… Hardcore just isnâ€™t the word. With the backing of a media giant like MTV, Nitro Circus is punching straight for the mainstream. Reaching 500 millions homes across the world itâ€™s bringing FMX with it into the limelight. Brainchild of FMX legend, Travis Pastrana, the series is a giant excuse for the crew to compete on who can pull the wildest stunts and go one bigger than the rest of the guys.

Despite his self-penned tag line of being a â€œwashed-up motorcycle rider,â€ Andy Bell has shown through the years how good he is in the stunts and sports he does. He has gained respect from some of the best athletes in the world through his dedication. As part of the core group on Nitro Circus he has helped that have work to bring extreme sports to the mainstream. Playing nemesis to Travis Pastrana is no easy task either! He talks to us about the growth of FMX as a sport – from the days of side shows stunts, to the stadium-filling extravaganza it is today â€“ and his personal progression from motorbikes to that childs tricycle…

So when did you start riding freestyle?

Back in 1996 the event promoters used to give me 50 dollars to do a few heel clickers at halftime break. Then in 1999 I started doing FMX full-time, which is surprising as I come from Canada, which isnâ€™t exactly a hot bed of FMX.Â I met some of the original riders, like E.T. [Edgar Torronteras], at the first X-fighters, where I was judging. 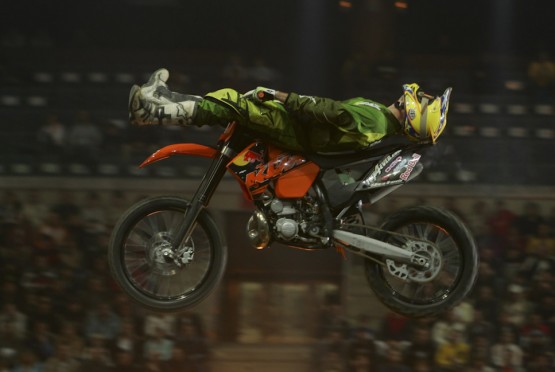 Andy on a bike asleep.

What have been your greatest achievements in the sport?

I canâ€™t believe I made my living riding motorcycles and all the other stunts! Iâ€™m blown away that I have made a nice, little living travelling the world with my friends doing fun stuff, crazy stuff, sports stuff… I would have never have thought as a child I would be able to make a living out of it. It has been amazing! 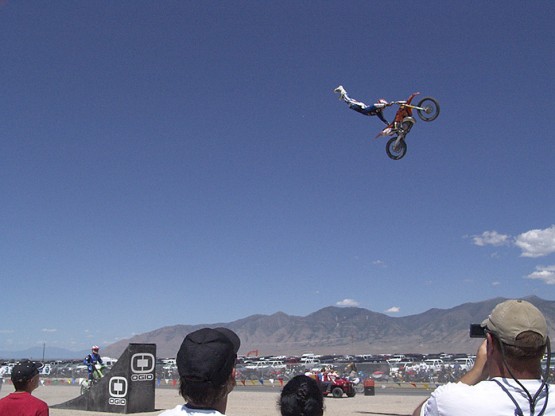 Wheres your favourite place that you have travelled to doing this sport?

It is really hard to narrow it down – Iâ€™ve ridden in Dubai, Qatar, Chile, Austria, Italy, Germany… So many amazing places. Every place is a different experience with a different group of people. I really love Budapest and Prague, but all those places have been amazing. 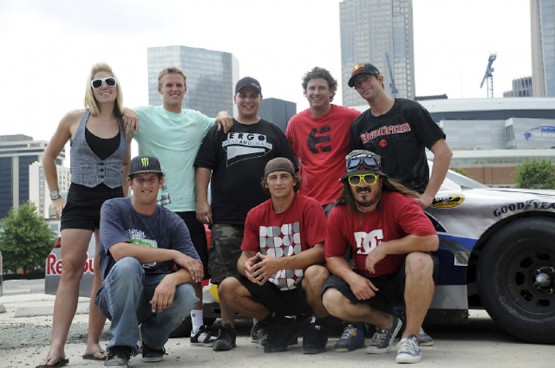 You are part of the Nitro Circus gang, you could be called Travis Pastranaâ€™s nemesis, how did that come about?

I meet Travis when he was 14, back in 1997. He was in my town with Fox Racing, filming a video. They had built a jump but were too scared to jump it! The promoter then told them that one of the local guys (me!) could hit that jump! So they said bring him on… I didnâ€™t have a bike at that time, so I borrowed a bike, went to the jump, said hi, then hit the jump. I kinda blew Travisâ€™ mind because the top three guys in the world were there and none of them would jump this 30-35 metre double with a 3 metre take-off and 1 metre landing! It was horrible.Â  After that they asked me to show them more jumps. So I showed them around for a few days. I went back to my parents to work, and stayed in touch, became friends and we started riding together. 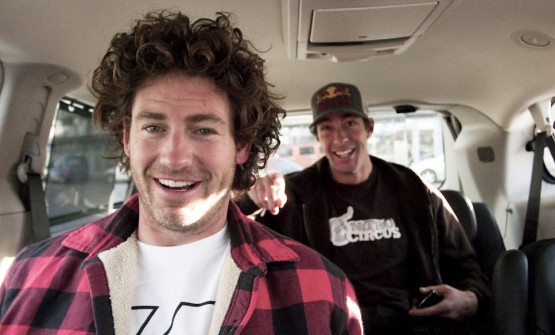 Andy and Travis joking in a car whilst in Prague

Nitro Circus does some crazy stunts, what is the child’s tricycle trick?

The cool thing about the big wheel is they were a present for Travisâ€™ birthday, and we all had so much fun on them. When we were filming the first show I had just got there to Baltimore, with my bags still in my hands, they said, â€œhey Bell, jump on this, you can back flip it!â€ I had never even seen it before, I got on it, jumped it and landed. Then they pulled the ramp back and said â€œIâ€™ve got a dollar for anyone who can flip it.â€ I thought OK then, I didÂ it, landed it. It was a really huge jump, although there were pro BMX riders that wouldnâ€™t jump it on their BMXs! It then encouraged us to do even more crazy stuff with it, including the rocket motor back flip with it! Travis didnâ€™t land it and was really angry I beat him. He is Mr Pro at everything, and in his mind Iâ€™m old, fat and have a desk job, there is no reason that I should beat him! 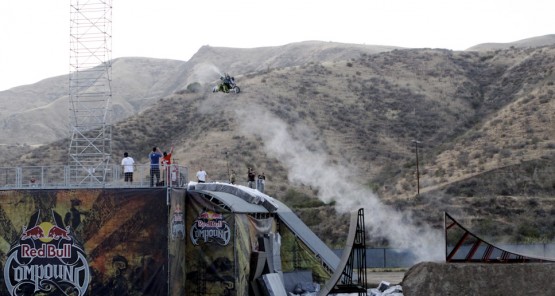 Just in case you missed it at the top.

How would you sort out who is number one? Which stunt would you do?

Itâ€™s hard, he is so good at everything, heâ€™s an unbelievable athlete. I beat him in a stock car race in Nebraska once, at a track heâ€™d raced in cars heâ€™d raced – I beat him twice and won the race. I never thought I could beat him in a car! I would say that with the original big wheel flip, itâ€™s already been proved, Iâ€™m better than him on that!

Iâ€™m good at motivating through harassing, I guess! Iâ€™m good at all things, but master of none. I was never the best at even my sport, FMX.

How have you guys contributed to the world of action sports?

MTV showed what we do to a whole other audience, that probably have never seen freestyle motorcross, the sport became more mainstream, because of that. Travis is such an international superstar he brings so much spot light to anything he does. He is a great kid, the best champion any sport could have. 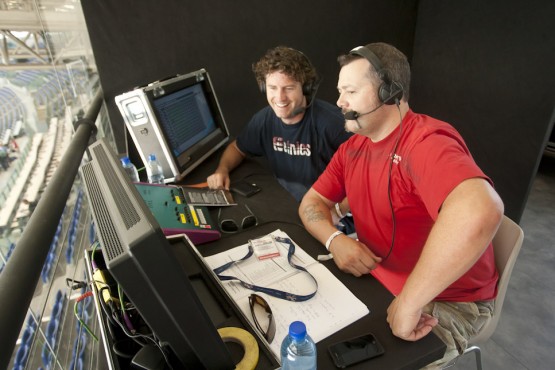 You commentate for X-fighters, what are you next projects?

Iâ€™ve been part of X-Fighters since almost the beginning, itâ€™s an amazing show and they have the best riders in the world, the best people in the world. I love being part of it, Iâ€™m lucky to be part of it and hope to continue doing it!

No worries, see you at the next event.

Despite his image and tag line of being a, â€œWashed up Motorcycle Rider,â€ Andy Bell has shown through the years how good he is in the stunts and sports he does. Gaining respect with the best of the best with his dedication, he is part of the core group that have worked to bring extreme sports mainstream and being the Nemesis to Travis Pastrana is no easy task.

He started racing when he was 13, turned pro at 16 in 1992 and raced pro motocross until 1997. He raced pro in Canada, and nationals in the USA, with an average finish of 6th in Canada, always in top 10. He was a top 40 rider in the USA. He says he didnâ€™t like training, so wasnâ€™t ever quite good enough.

Andy started riding FMX in 1998, and as rode pro until he retired from it in 2006. Today he does movies and TV shows in Canada. He stars in the movie, Nitro Circus 3D, which will be release later this year. 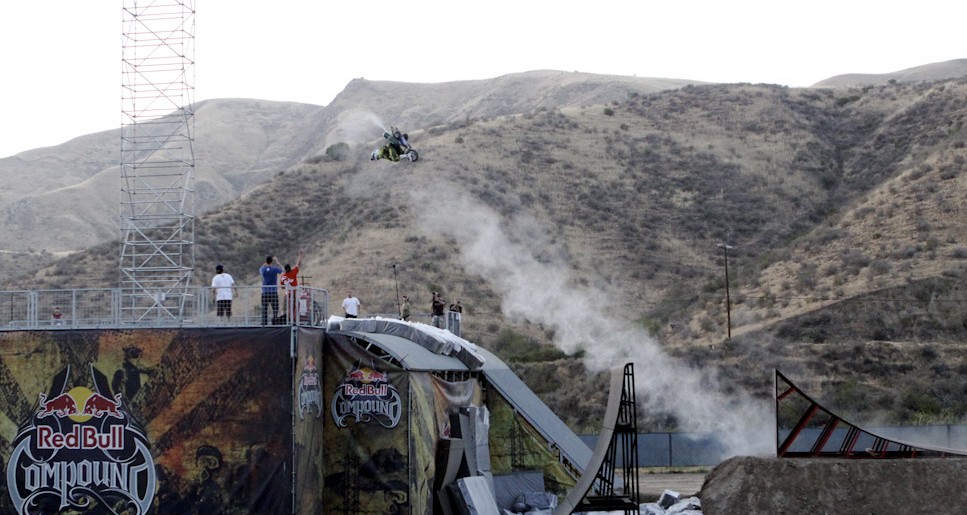