The Scott 11 rider Emilie Siegenthaler just finished the 2012 world cup in 5th position which means one thing, she is fast. How fast? After following Emilie down a trail that we know very well we can categorically say that this girl is really fast. 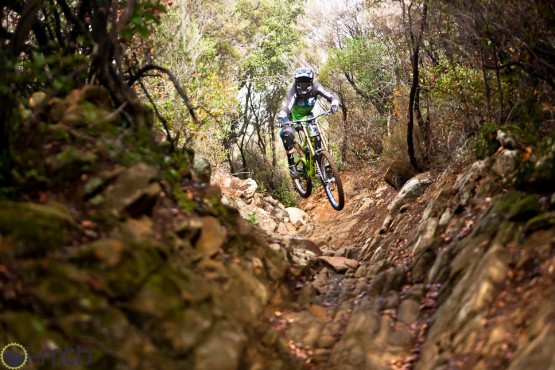 But we knew that already didn’t we because of her results? Well no. Times on a result sheet only give a relative comparison to how fast racers are against one another, when it is possible to witness their speed up close on your own trails and follow them at the same time, then it becomes possible to know what is going on. Watching riders ride at a race only gives half the picture trying to stay on their back wheel gives another idea.

So how did we do? Well we managed to stay with Emilie for about 4 seconds before she was gone and we couldn’t see her anymore. Yes only 4 seconds, after watching and riding with Emilie today our respect for women’s MTB increased a lot. These girls are crazy fast, full of energy and love to ride. Emilie was hitting everything hard and with full commitment, showing what it takes to be a DH rider, we can only wish to be that good. 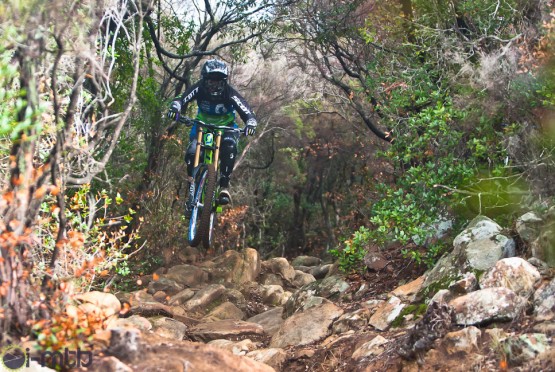 Spending the day with Emilie and listening to her stories and her ideas about racing, bikes and what it is like to actually be at the top level of the sport was very interesting. Girls don’t often have their point of view put forward, with the focus being on the top men in the sport. We thought it pertinent to see whats going on with Emilie and the things that are going on in the sport. 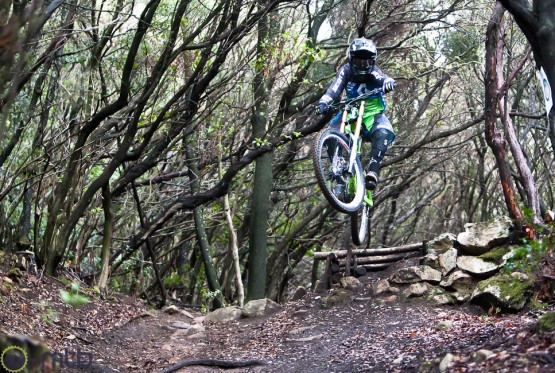 Firstly we started on something interesting, wheel size. Scott with Nino Schuter have been pioneering the adoption of 650B, so it was only natural to apply that to DH bikes as well?

We have known for a while that Scott 11 have been testing 650B wheel sizes on DH bikes and it was great to be able to ask a rider about it directly. After a bit of digging Emilie started to tell us about her experiences, well actually she started to talk about other riders and what they thought, and didn’t give anything away, in fact it seems lots of riders from many DH teams have been playing with the concept, she didn’t let on about much, so lets look at it with a bit of thought applied and knowledge so far and add in a few of the rumours going around. It seems that 650b wheels will become another tuning option available to DH riders. They will choose which wheel size to ride according to the track they are on. Straighter faster tracks with many jumps suit bigger wheels. Technical, tighter, slower tracks suit smaller wheels. Unless you are one of the few riders who hate 650B wheels. So no news there then, just another tuning option coming in the future.

Oh we almost forgot, what was Emilie’s official answer, “No comment.” 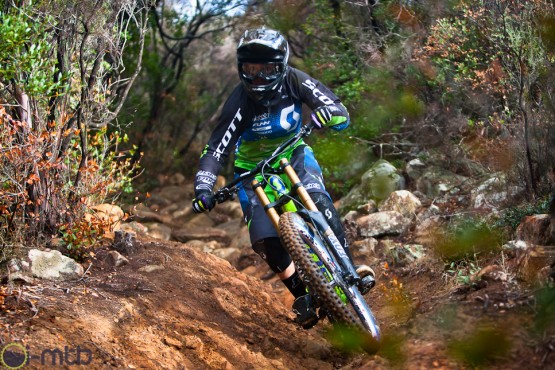 Developing the controversial theme a bit more we started to find out about the subject of “downgrading,” women’s points at DH MTB races, which at the world cup level is under going some controversy at the moment. With a number of team owners trying to reduce the points allocations for girls riding, thus influencing the end of year team result, this is not coming from the UCI. As those without girls on their teams in theory don’t get as higher score as those with, as the girls give another source of points to the teams. Apparently according to some all male teams, it is unfairâ€¦

Recently at the World Cup in Norway, all the female riders wore blue armbands in order to show their support that they should not be downgraded. Emilie’s point of view was, “Those with no girls on their teams are not going to help the women’s side of the sport much just to win more easily, this puts pressure on us when it is already difficult to be recognised.” She went on to say, “We have to ride the same tracks as men, on the same style bikes and we do it well. If you look at other sports like skiing, they don’t have to do what we have to, we generally have it tougher competing at the top level relative to women in other sports.” 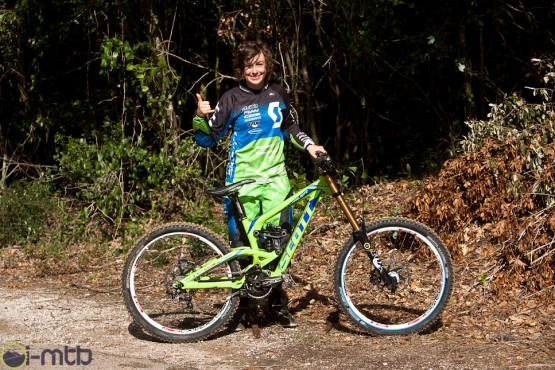 With a few controversial points out of the way we moved on to normal bits of bikes, especially asking her about how it is to ride the new Gambler, with Emilie explaining to us how she sets up her bike. “I lower the front of the bike a bit as i’m quite small, it helps with control. The new Gambler is quite open at the front and is super stable. It is an amazing bike, it sticks so well in corners and is really well balanced, I prefer it compared to the old Gambler. The new tread pattern Schwalbe tyres we are running are gripping really well.” Moving on to brakes, “The new Shimano saint brakes are really great also, they stop amazingly well and don’t over heat. Brendon really likes them as well, as they are not too on/off.” Emilie was really happy with the feeling of the bike. “It is great.” she hopes after her crash 3 months ago where she broke her collar bone to get back to racing in the new year and continue pushing the new bike.

Lastly on to her riding, today we took her on some hard Enduro tracks which Emilie suggested could be Worldcup downhill grade tracks, but as they are narrower would need a “bit” of widening. Emilie compared Enduro to DH, “Over the last years it is clear that DH is about going fast and straighter than Enduro. The style of tracks has evolved over the years, I like to go fast and not have to fight with the track, so it is easier then to just hit everything as fast as you can to skip over the tougher bits. If you go too slow then technical tracks will just make it hard for you. I like to ride fast, I find though tracks like in South Africa really hard. The pedalling really killed me, I suffered a lot. Italy, Vale di Sole on the other hand is a really difficult track, a real challenge.” 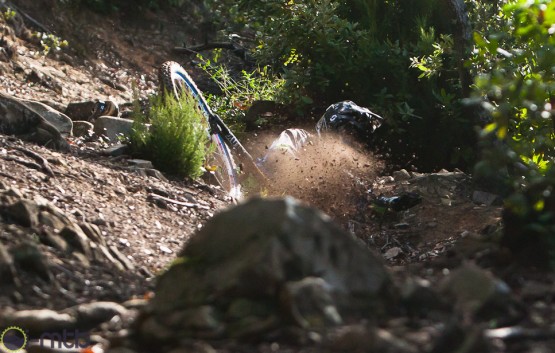 All in all then a great rider with speed, style and a lot of determination. Also she crashed today which was her first crash since the one where she broke her collar bone. Luckily though all was well and she picked herself up and got on with riding hard down the rest of the trail. Lets hope she does well next year and manages a few podiums and wins.

Oh we almost forgot, we didn’t get to try the Gambler, it was too small and setup for Emilie, or maybe we were just scared of looking like a lemon in front of one of the best female riders in the world. 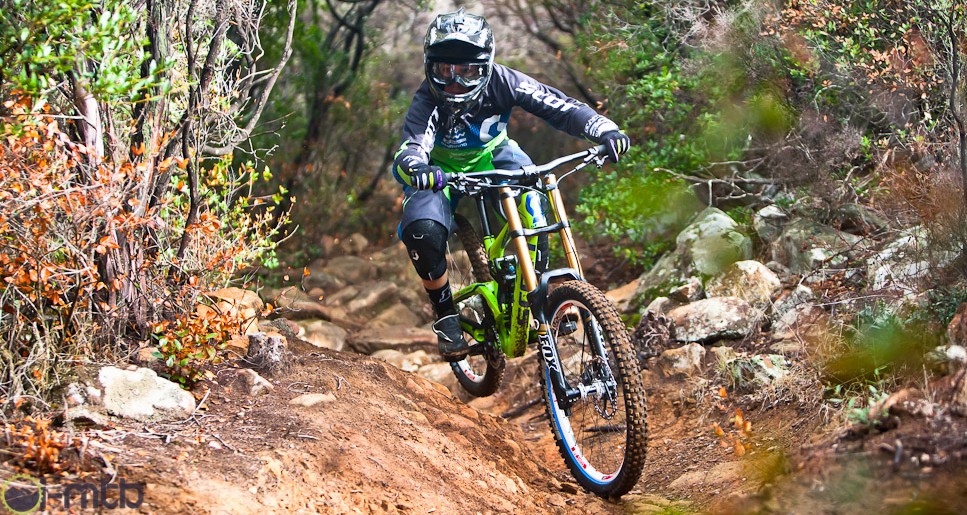