Enel as the second biggest electrical power company in Europe have started to turn their attention to the electric bike market. Enel potentially has a massive out reach to the world of biking through their large customer base.

With the emergence of electric bikes for the masses and the advantages they bring in city transport, plus introducing people who may not have considered biking off road,Â they have recognised that there is potential. Il Cicalino with MTBeer, as part of their development plans, tried to show riders what the electric bikes can do.

On the 29th of March MTBeer held a competition and test day and presented the Enel Electric mountain bike to the riders who had spent a week testing various new bikes at Il Cicalino. 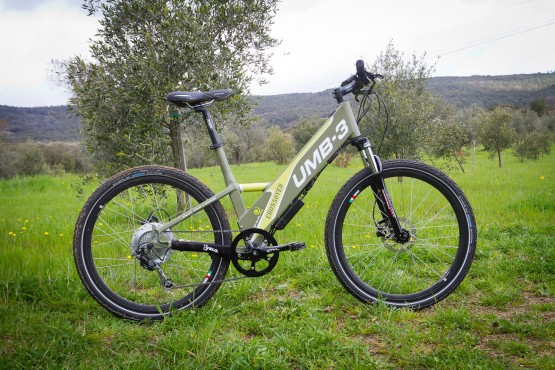 The concept is simple an electric bike that can be used in the city that has mountain bike styling and light off road abilities. 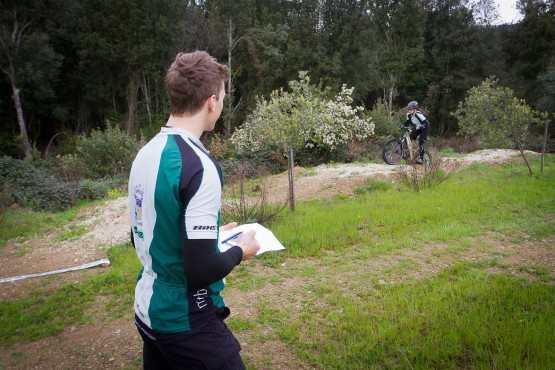 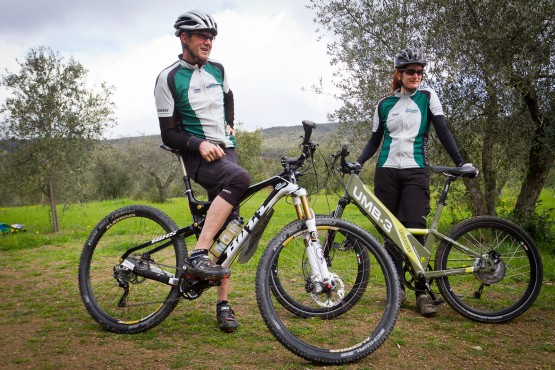 The Beer family have a range of bikes, and offer electric bikes as part of the touring package. 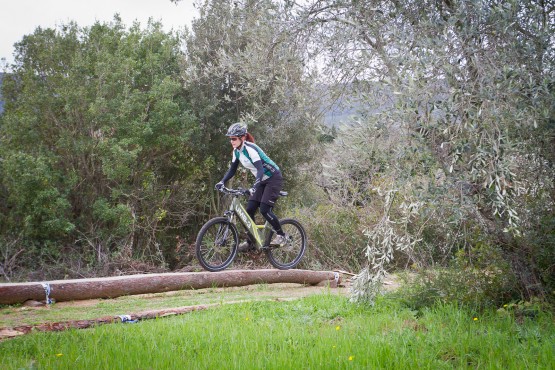 The concept of the electric bike is to allow people who don’t normally bike to access trails more easily. 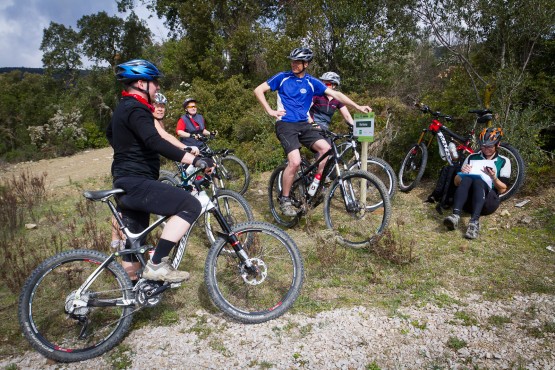 Biking for fun is the number one point of bike sports for most people, electric bikes in our experience allow less able riders to ride with more able riders and have more fun. 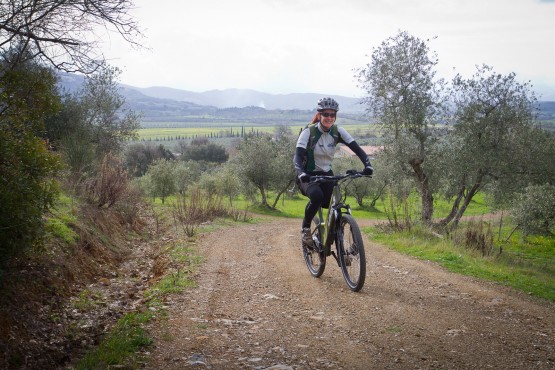 Even the most cynical person who thinks electric bikes are not proper bicycles, once riding up a hill starts to understand what the point of them is. 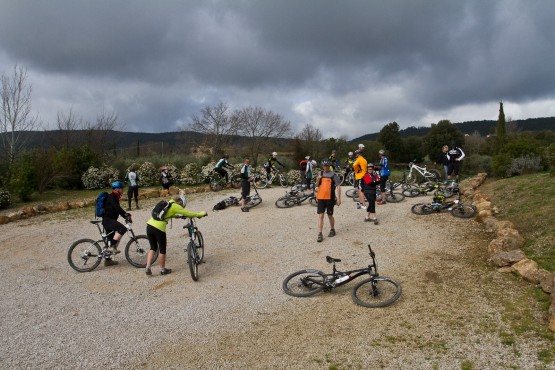 The competition group before the event. The idea was to have timed runs over different obstacles. 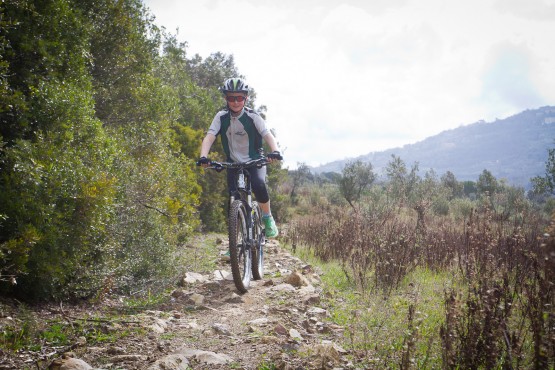 The obstacles included technical paths and log rides, all testing balance of the riders, including Daniela Beer on her electric bike. 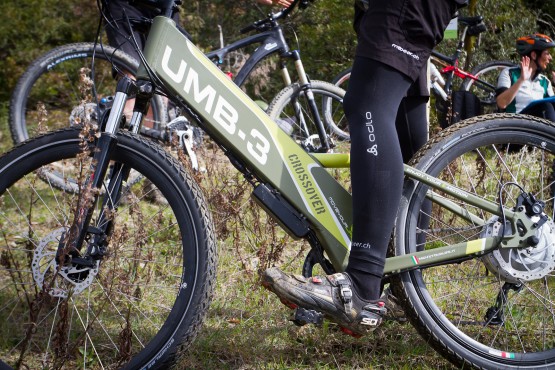 The big question is then how did Daniela Beer get on with the electric bike? Well firstly taking into account the Enel bike is more of a crossover city machine rather than a pure MTB, this was not it’s natural location on rocky fields, despite this it actually worked quite well, easy to use, just turn it on and pedal. The power cuts in fairly quickly and helps the rider through the pedal stroke with the motor being mounted within the rear wheel hub, power take up is fairly smooth and controllable. Great for getting to the top of the hill quickly and smoothly.

Obviously in general electric bikes are not as light as normal bikes as the batteries have to be stored somewhere. In any case with the extra power on the road you don’t really notice the extra weight much when pedalling normally. The motor in this case is a 250W variant and used in this form is designed for rougher than normal roads but not full off road riding.

The rise of electric bikes over the last few years has been due to the increase in environmental awareness and the continued promotion and development by various companies and governments of the machines. In general electric bike salesÂ in some markets have been huge, like Switzerland. Other markets such as Great Britian, being slower to increase. Â The main focus has always been the road and city use for the electric bike, off road riding genreally needs bikes which are easy to handle and suspension systems, the extra weight they carry with current battery technology at the moment counts against them off-road.

When large companies like Enel get involved in these type of markets it really helps sales, and product awareness. Their marketing ability and budgets help normal people understand sustainable transport for the future and this case they might not normally be aware of e-bikes.

“The goal is to triple, within the next few years, the amount of electric bicycles that are being driven, thanks to the benefits of the sustainable products offered byÂ Enel Green Power, which combine environment-friendly technology, performance and comfort.”

Will the electric bike take over in the off-road market? Probably not for a while. When battery technology brings the weights down then market penetration will start to increase in the off-road sport market, for the moment then we will have to wait and see, certainly products like the UMB3 will help move people in the city away from their cars, onto the bike. In combination with longer ranges and fast charging points the movement to electric power will have to continue to take hold in the city before taking an increased percentage of the off road market and moving consumers away from tradition pedal bikes. However that said we are yet to see someone try an electric bike and not enjoy themselves and have fun. 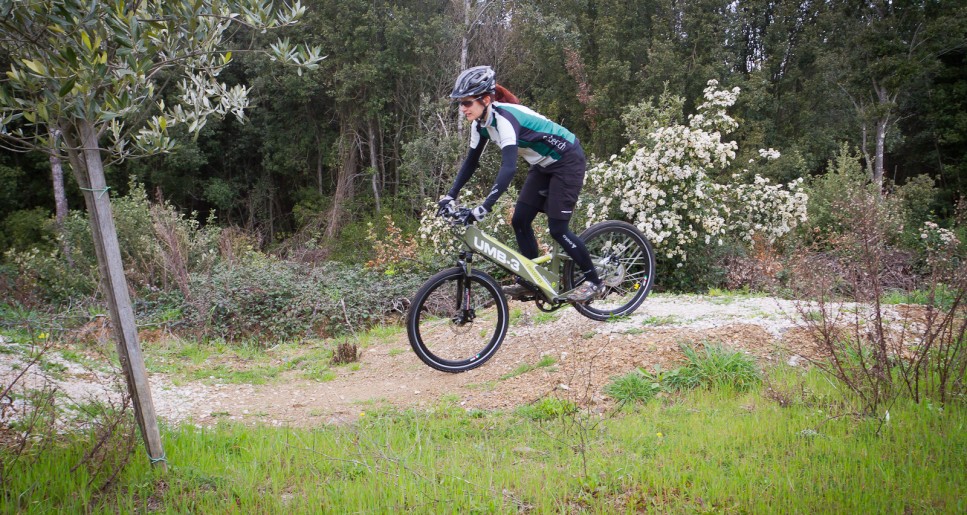