The General Lee 10-40T cassette is the latest piece of engineering from Leonardi Factory, ask a specialist small bike parts producer from Italy.

The idea of this cassette is to offer riders who have a 1×10 system already, viagra | the option of a larger range of gears without having to upgrade the whole gear system including shifters, bronchi derailleurÂ etc.

Speaking to Leonardi Factory it became clear this is one of their hardest projects to date. They told us, “In general one has to be a bit mad to build a complete cassette, it is the hardest piece on a bicycle to engineer.” After some lengthy discussions about chain movements and cassettes, it was clear the main challenges of building a product like this is the positioning and shaping of the cassette teeth. 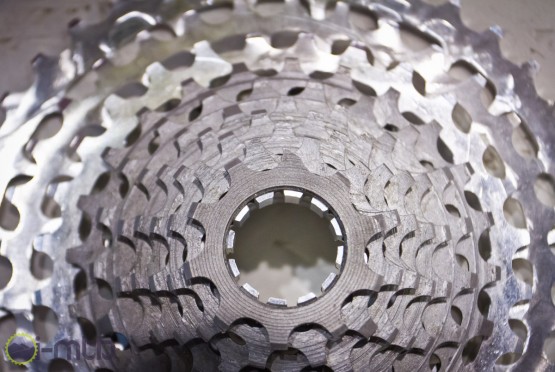 Teeth phase is crucial for easy chain movement across the cassette.

Each cog has to be correctly aligned (in phase) with respect to the cog that follows it, especially in the upward movement of the chain into lower gears. The phase of the teeth is the secret to smooth and correct gear changes, it is also one of the hardest things to achieve. Sram and Shimano with their cassettes have their own secrets to chain movements, developed over many years of cassette production. 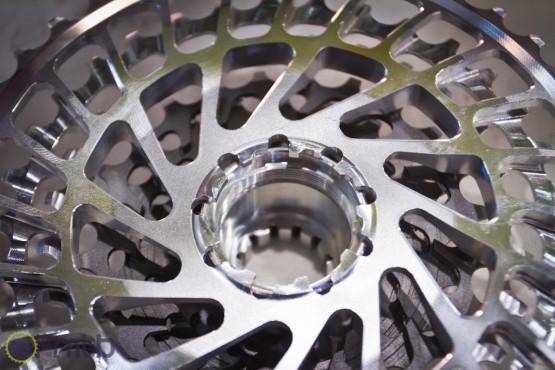 Leonardi factory have taken advantage of the Sram innovation of producing a new style freehub body, by doing this they have been able to reduce the highest gear to 10 teeth, increasing the range of gears. In the version presented, the largest gear was 40 teeth, but they are able to produce a version with 42 teeth as well. 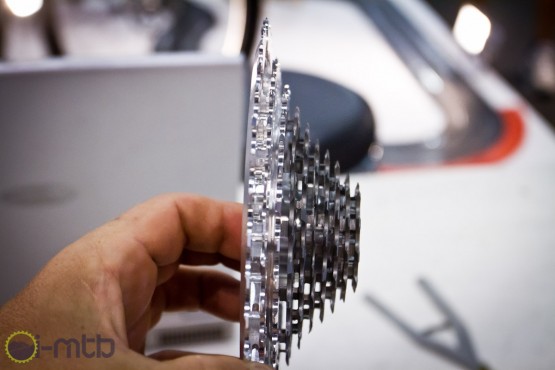 Leonardi have designed a cassette that is supposed to work with normal derailleurs. The Sram XX1 system has its own specific derailleurÂ system. The challenges to using existing derailleursÂ are that the they may be pushed to behyond their design limits for jockey wheel positioning etc. However this has not proved a problem so far with Leonardi factory, suggesting that the success of gear changes is also down to the gear hanger position on the bike. Some bikes have a marginally different hanger position that can influence alignment and thus gear changes. Apprently there is no correct exact standard for gear hangers and very small differences are present between bike frame brands.

In our experience of testing other offerings from Leonardi with various derailleurÂ setups, we have never experienced any troubles with the derailleur not being able to handle the greater capacity and range of gear teeth. With a correctly setup and adjusted system the Leonardi cassette adpators we have used up to now have been pretty good, yes not exactly like the Sram or Shimano original systems but quite close in performance. Any losses are outweighed by the gains of having a larger spread of gears available in a simple 1 x 10 system.

This prototype production cassette sample literally came off the CNC machine a few days previously and is in the early testing phase. The overall surface finishing was not complete yet, and the product is very much in a raw state. The designer explained how there has been a lot of trial and error when producing this type of product, with each production series improving compared to the last, as lessons are learned and technical improvements implemented. 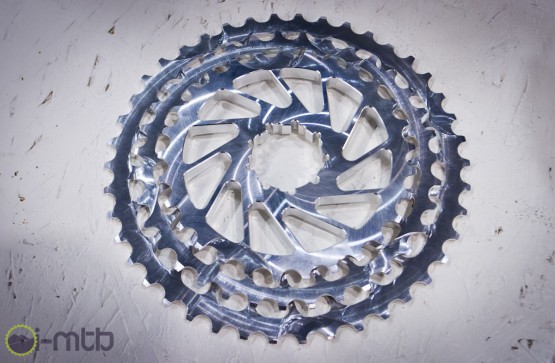 We will be receiving one of the first samples to test soon, Leonardi also presented an improved Shimano cassette adaptor as well, if shifting performance is like that, then it should be a very interesting product to use.