E-Bikes (electro assist) as a concept have been around for quite a few years now. In towns and cities, their popularity has grown significantly.

Off road however has been the preserve of only a few companies. Then at the Padova 2011 trade show it was clear to see quite a few of the big bike makers had started to produce useable E-bikes. The general formula observed though was always a front suspension only layout, with various configurations for the motor and battery. Some with the motor within the back wheel, many with the motor integrated around the central bottom bracket, with the battery placed in different forms in various places according to the bike.

Before writing this first test though the following should be noted. When testing bikes it is difficult to transmit the feelings and performance, which can be entirely personal across of how the bike behaves even more so with an E-Bike. The focus then with all tests that are carried out on I-MTB is to rather than assess the bike millimetre byÂ millimetre, we focus on usability and fun factor, with a general look at the features. There are many sites that will give a precise analysis of how a product is. I-mtb has no motive for testing other than just to try a product with an open mind and look at how it fits into the market place and if it works on the trails we ride.

The Flyer MTB then is a full suspension 29er electro assist bike. In one swoop this bike challenges the common concept of what an MTB bike should be.

The bike works by pedalling normally, and depending on the assist mode set, gives a different amount of electric power assist to the rider, either helping the rider up hills more easily, or going along faster or further on flat sections. The controls consist of normal bike controls plus a small computer and button on the handle bar. 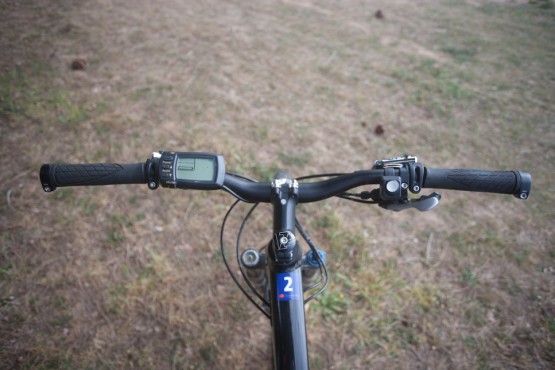 The idea is that this bike is easy to use. The computer has 4 modes to select power input from none up to high mode, plus a speed/power feedback display. On the right is a button that allows the rider to use the motor slowly without pedalling, this was found to be useful when pushing the bike, free wheeling slowly or moving it around.

The centre of the frame around the bottom bracket is dominated by the motor and battery, here shown with the chain cover off. The battery clips in above the motor and is easily removable for charging with the use of a normal flyer specific key, so no-one can steal your battery. This allows the user to have a few batteries and swap when one becomes discharged.

The bike is longer than a normal bike to accommodate the battery and the rear suspension linkage. The shock was a Fox shock, with a Fox fork up front. Both these units are proven and found on many bikes in the market, in our test both worked well.

The Test.
Well on first impressions the bike is heavier than a normal bike, but when pedalling with the assist on you don’t feel it spoils the fun or ride. We rode the bike over various trails but focused more on cross country trails with some rocks and up and down elevations.

The bike preformed extremely well and showed good form and comfort. In fact the speed and ease of going up hill was so surprising that we were taken aback by the enjoyment that we had whilst riding this bike. When riding we choose a line that would be taken by a normal rider and focused on just riding.

The Bandite trail 3 is a classic cross country light enduro trail that we normally ride, the bike got us around really quickly with poise and under control. It handled all the bumps climbs and drops well and we were able to do small jumps with ease. Compared to a normal enduro MTB bike that we use the e-bike took less effort and we did the same ride in a faster time.

Handling was really good, with stability at speed from the long wheel base and also the bike felt really well planted on the ground. When taking on technical sections the bike turned well, although due to the heavier weight and bigger wheel size compared to a normal 26′ bike, the rear end would follow a little bit later if we changed direction quickly. This by no means was bad and we think would just be a character of the handling.

Braking and gear changes were excellent with the XT components and disc brakes, grip and pedalling uphill was also amazingly good, with the bike managing to get over small sections that are incredibly hard to pedal up with a normal bike. The bike is light enough to lift the front wheel up easily over obstacles, and small jumps, but landings can be felt more as the bike is heavier.

After this test we took the bike up a much steeper trail that we normally just ride down, it managed well when we pedalled hard, and in reflection the effort required to get up the hill was a bit less than a normal unassisted bike. The trail though is rougher than the XC trail and in our opinion the bike can handle the rockier descent but we wouldn’t want to throw it down a hard enduro track, as we felt that the risk of damaging something might be greater than with a normal bike. In this case though it handled the downwards run well and in control at all times. It should be noted that the assist was kept in high all the time, when going down it did not cut in.

The total distance of our ride was 12km and with a fully charged battery and using high mode the battery was drained only 1/6th. Which is exceptionally good. So if we took the bike on a longer run we reckon you can go at least 50 km with out worrying on off-road tracks with general up down changes in height of up to 150 metres at a time with normally pedalling. At no point were we worried about running out of juice.

Conclusion
This bike in our opinion is exceptionally good fun, fast and gave us a huge amount of freedom to go further and uphill steeper, with less effort. The Full suspension elements of the bike kept us comfortable and in control at all times and we rode the bike properly off-road with no issues. To us this bike seemed to be aimed at a new market segment that allows less fit riders to go places they might find harder to get to normally. Or more serious riders can go further and explore more trails in the same time. This bike can be ridden like any normal MTB bike and on the same normal trails. We don’t think it should be ridden hard downhill on really big rocky trails, but it is not designed for that. For a light enduro trail bike and cross country this bike will open up biking to a whole range of people who will be able to do things that they had not considered before.

We were left really impressed with the bike and with a good component set and good build quality we think that there is little to complain about this bike. For it’s purpose it is great, we were left feeling like we had just had a lot of fun when we had been riding it. It will be interesting to see how this market develops, how this bike is improved over time and how many other companies start to offer what this bike has.