During the last year we have been using across various bikes the General Lee cassette adaptor by Leonardi Racing. This adaptor allows the user to convert and replace their rear cassette with a 40T large cog down to 25T cog with the lower 6 cogs being from the original cassette, giving a total wide range of 40-11 teeth.

This setup is not a standard part setup recommended by Shimano and Sram, however considering this and using standard rear mechs in various forms, over the last year the system has proved to work well with some tuning and experience gained. As should be obvious by now the idea is to have a wide range cassette for use with a 1 x 10 system, previously this size of gearing was only possible with Sram’s XX1 system. 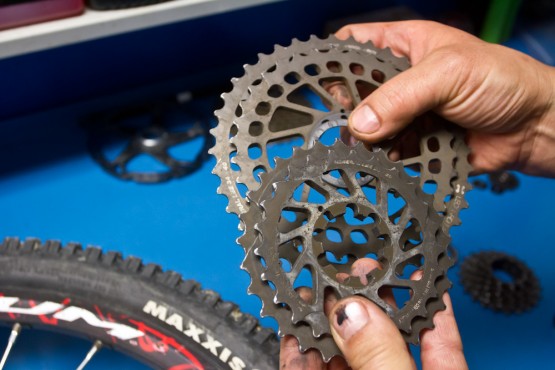 The adaptor after 12 months showing signs of wear.

The system has been used up-hill, down-hill, in dust, mud, and all types of weather. The adaptor is made of a light weight aluminium, and has worn fairly well, only now have the up changes into lower gear started to get a bit more vague. However this is only on the up-shift, up the cassette, when in gear, the system still presents no problems and pedals smoothly. The General Lee version we were using was the first production run, Leonardi are now up to their fourth production run. The latest versions have a different tooth form and when installed shift better than the original versions. Overall the wear has been acceptable for this type of after market system, as in the same period of time we have replaced the front 32T chain-ring once.

A new adaptor from the latest series, notice how teeth faces have been optimised and chain ramps moved compared to the original series.

Considering this is an aftermarket product that pushes the envelope of whats possible with a standard drive train, used in combination with a narrow-wide chain ring, we have essentially a XX1 system at a cost of â‚¬150 total including adaptor and front ring.

The first thing to note with performance is that the derailleur has to have the B-tension screw adjusted beyond Â it’s normal settings to make sure the upper jockey wheel cleared the 40T large cog. For the Sram derailleurs this was not a problem for the Shimano the screw was on the limit. In our opinion the geometry of the Sram derailleurs is better and is more flexible for this adaptor, with the chain also passing further forward around the bottom of the cassette which we noticed gave better gear changes when the going was very muddy and very extreme regarding dirt. The Shimano derailleurs in this sense were Â not so adaptable to be pushed beyond their limits. In all cases we recommend using a medium or long cage derailleur and a chain length that is not too long, with new jockey wheels.

Shifting in most cases with a complete new chain, jockey wheels and cassette,Â could be adjusted to be very reliable. Under-power shifting was better than in the bike stand with no power applied. The chain being picked up better on the adaptor. The only location where the shifting on this first version could sometimes miss or take longer was passing from the original cassette to the adaptor, so from 5th gear to 4th gear. The latest production versions though have been improved much more and now shift almost as well as the production cassette parts they replace.

Over time shifting performance did fade and readjustment of the gears was necessary, but, nothing which stopped the enjoyment of riding. The use of a clean chain and gear cable always meant things functioned better. Gear hanger alignment is important, this system is more sensitive to being used with a bent derailleur hanger or derailleur. To combat any vagueness when shifting, we added in a little bit of old school extra feeling in our hands on the upshift with the thumb on the shifter paddle, this corrected any problems.

Despite being used a lot the teeth are in good shape, however shifting performance can be improved now with a new adaptor.

Considering the price, quality, weight (it weighs less than what it replaces) and performance, the Leonardi General Lee cassette has really worked well and has been a valuable change to add to the bike. Used in combination with a narrow wide chainring the need for a chain-guide is negated. The shifting in our opinion is good to acceptable and although not quite up to the Sram original XX1 system actually comes fairly close.

When pedalling though it is not really possible to feel that you have an after market modification in any negative sense. Speaking to the people who have made this cassette adaptors it is clear they took on one of the hardest things possible that could be souped up on a bike. Shimano and Sram have decades of experience and research and development money in their systems, a small shop from central Italy has made riders have the opportunity to try something and only spend 20 percent of what an XX1 or XO1 system costs.

Wear was good considering we rode 2-3 times a week, but not in super wet conditions. For trouble free use your bike need to be aligned properly on the back end, no bent gear hangers!

In the next months we will be testing the latest adaptor from Leonardi Racing that is sure to make another leap forward in performance and focus interest possibly of others on the technically most challenging aspect of drive trains.

Leonardi Racing.Â They also have a cool webcam live from their workshop.