The year is almost up and we have been busy following pro riders around all over Europe and seeing them in action at various races, practice sessions and also visits to the Trail Areas in Tuscany. The highlight of the year was probably the very first Enduro World Series starting off in Punta Ala in may 2013, in the Bandite Trail Area. The best riders in the world from all disciplines descended on Punta Ala to try the new international Enduro race format. Fabien Barel won the first race with some very fast riding, however the racing was tough and some of the top professionals including Nico Vouilloz suffered mechanical problems, others maybe didnt know the tracks as well as the winners, but everyone had fun and enjoyed what has become the new star discipline of mountain bike riding, with riders from Cross country and Downhill taking part.

We have put together a few pictures from 2013 showing a selection of the professional riders that we have worked with in all the locations we have been shooting in including a huge amount of time in Tuscany where the quality of the trails cant be understated. We hope to see everyone again going fast in 2014.

It is possible to ride all the trails all year in Tuscany from one of our bike centres, Il Cicalino, Massavecchia, or Puntala Resort.

DirtTV: Punta Ala Enduro World Series Round One a Mountain Biking video by orpheusproductions

Two Italians in Punta Ala 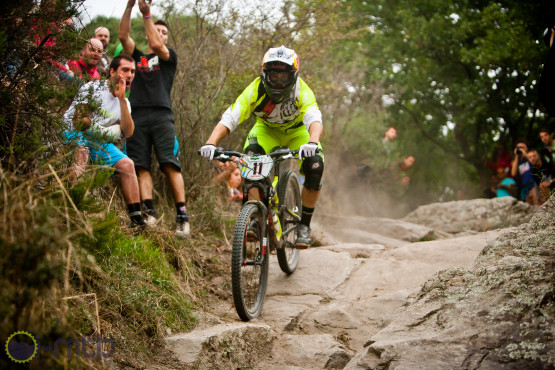 Curtis on his 29er in Finale Ligure near the end of stage 5 of the EWS. 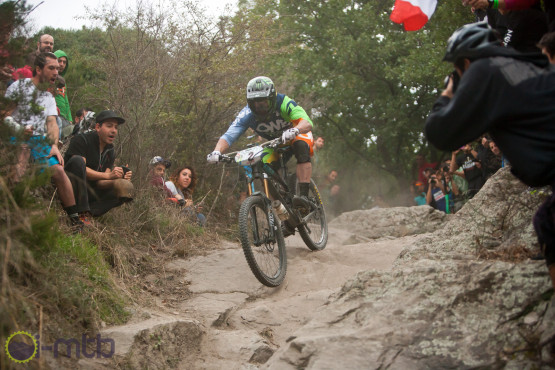 Jared was the secnd fastest man in Enduro in 2013.

Andrea Bruno was unfortuantely slightly slowed down this year due to a shoulder injury, however he will be back and fast as ever in 2014 at selected races. 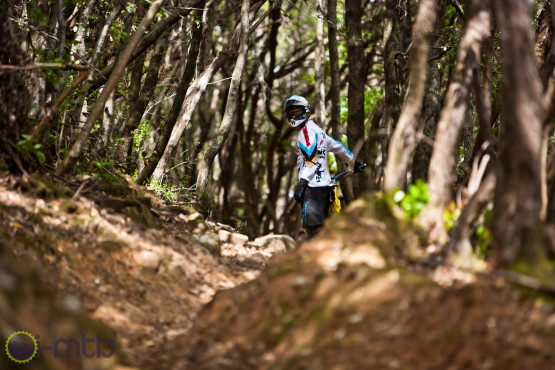 Andrea is a true professional and dedicated to finding the right lines on the trail here in Tuscany. 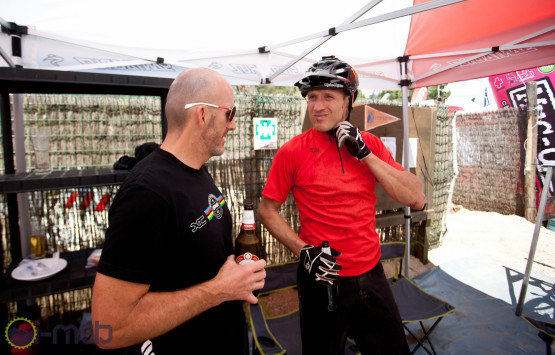 Steve Peat 2009 DH world champion, choose to race some of the EWS races this year and was supported by the whole Santa Cruz team. Here he speaks with Rob Roskop in Punta Ala. 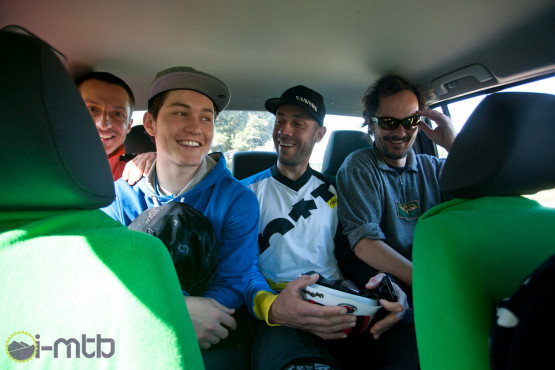 Fabien Barel and Theo Galay were early visitors to the Trail Areas in Tuscany, dong a preview with 26in.fr magazine. 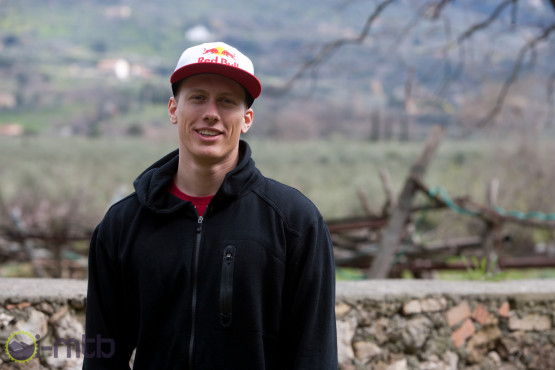 Many don’t know that Nick Beer and his family are seasonally based out of Il Cicalino, Massa Maritima. Nick is one of the top ten DH riders in the world, he practices on his trail bike when in Tuscany. 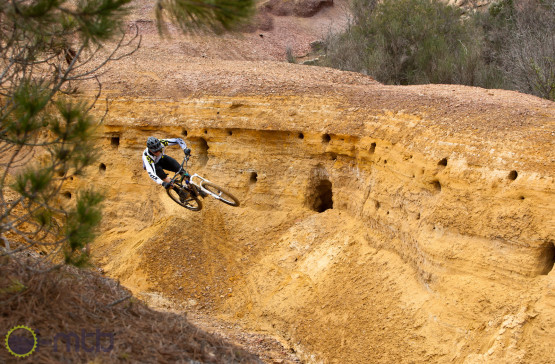 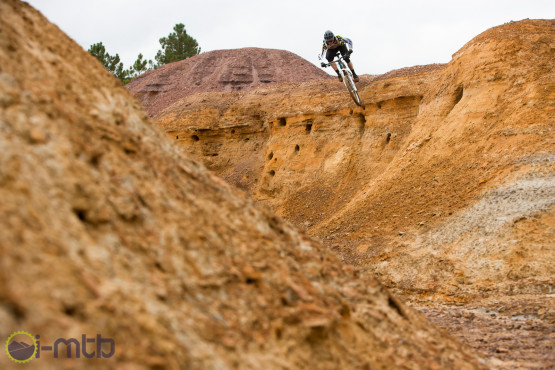 The yellow canyon is almost like a mini rampage track, with a few nice lines that can be dropped in with a normal bike. 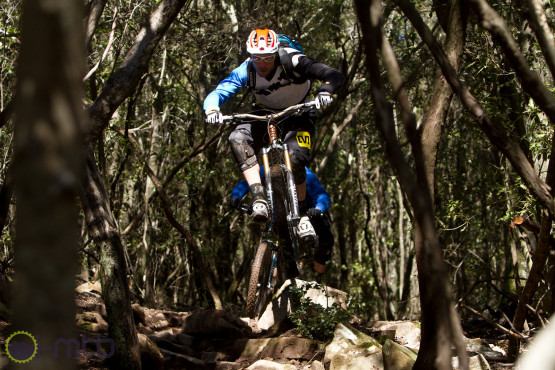 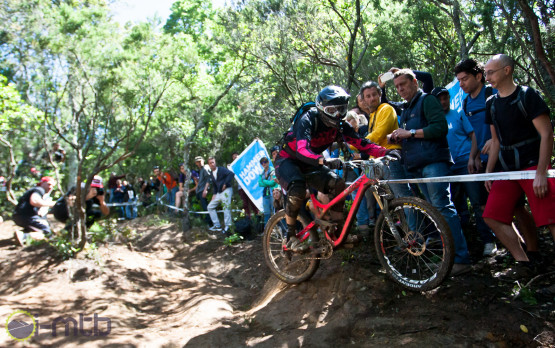 One of the fastest gravity Endurance riders Remi Absalon here riding at the EWS in Punta Ala. 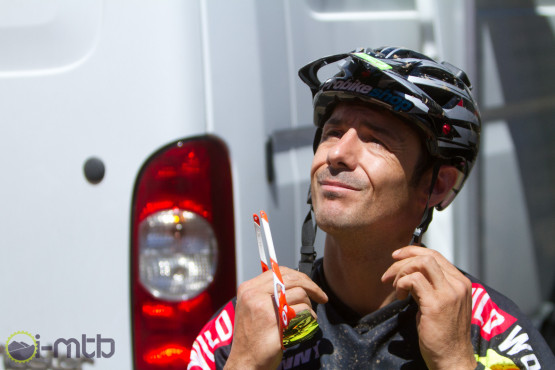 Cedric Gracia was starting his conversion to fulltime Enduro racing and used Punta Ala as his first port of call in 2013.

Davide and Cedric were the first riders up the hills at the EWS in Punta Ala, Tuscany. 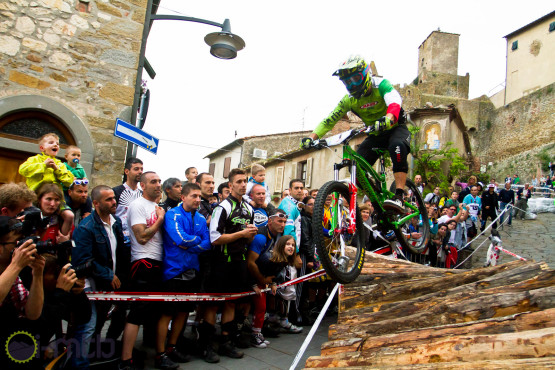 The prologue in Castiglione della Pescaia bought thousands of people out to see the start of the EWS in Tuscany. 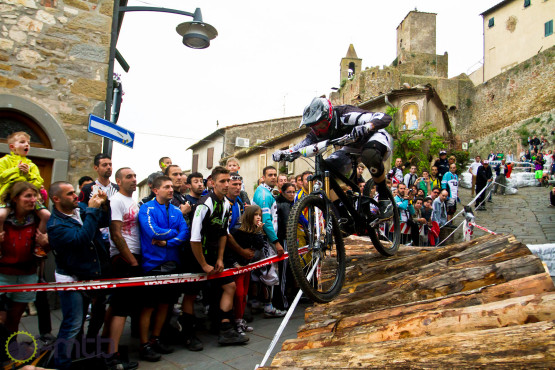 Dan Atherton was the true professional this year and took every detail of the racing seriously in the EWS, including his decision to repair his shoulder early. 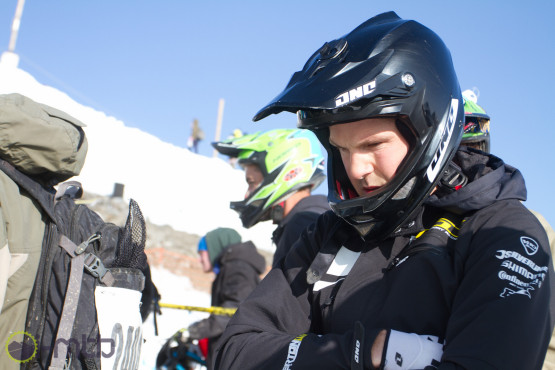 Later on in the season at the Megavalanche Dan was even more focused on his racing. 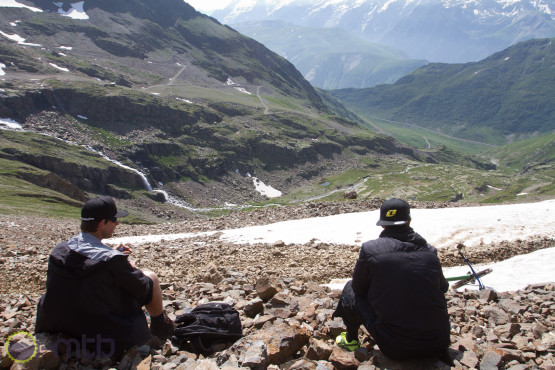 However walking the tracks at the Megavavalanche is a big task. Dan Atherton stops to enjoy the view. 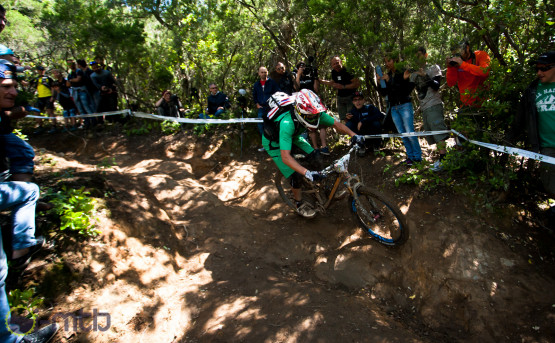 Watching the Downhill 2012 and 2013 world champion Greg Minaar was a real spectacle at the Enduro World Series in Punta Ala, riding for the first time his Bronson in race conditions. 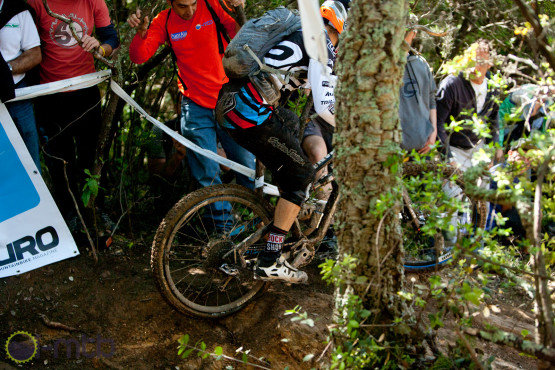 Nico Vouilloz had it tough for the first Enduro World Series race, blowing out a tire and having to go a bit slower in Punta Ala loosing valuable seconds. 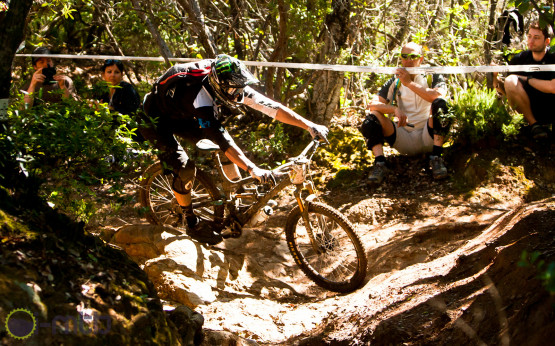 Jared Graves showed his strength from the start of the Enduro World Series season in Punta Ala. Here he rides the last corners of Rock-Oh (ps2) of the race. 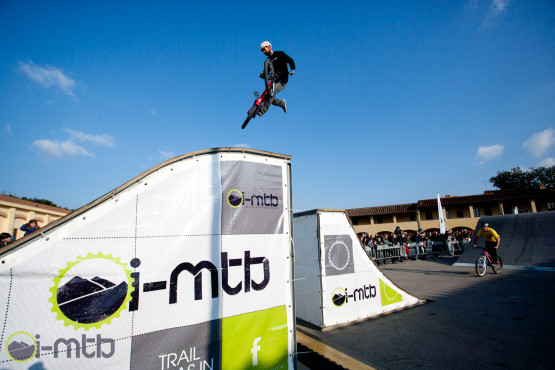 Other notable events we visited included the dirt jumping demo at Firenze Fiera with Timo Pritzel, one of the original dirt jumping riders in MTB. 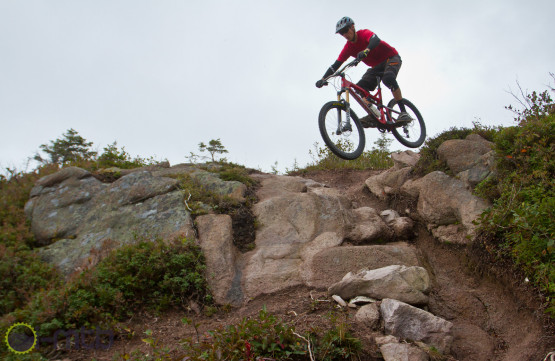 We made a short visit to the East coast of Canada where we meet Sheriden, one of the top DH riders in Canada in 2013. 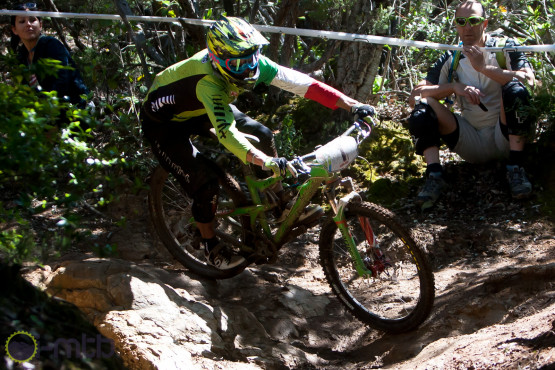 Davide Sottocornola showed his prowess this year but also showed how the Italian level of EWS riding probably needs more support inorder to push the riders into the top ten in the world. Davide is fast, but the other riders in the world got even faster last winter, this winter all riders who want to do well will need even greater training and commitment to perform better, Davide is up for the challenge ahead. 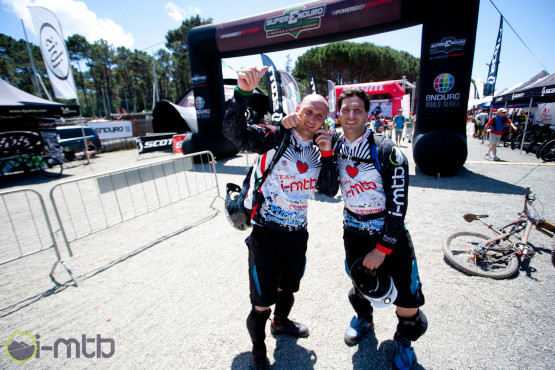 The point of the Enduro World Series is so that riders like Luca and Nino can race against the worlds fastest, and have fun whilst doing so. 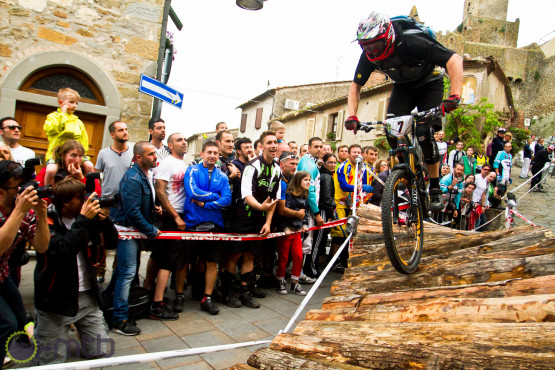 The prologue of the EWS in Punta Ala claimed one rider as Steve Peat crashed into a corner, here he takes it “easy” over the jump, showing how mere mortals would like to be able to ride. 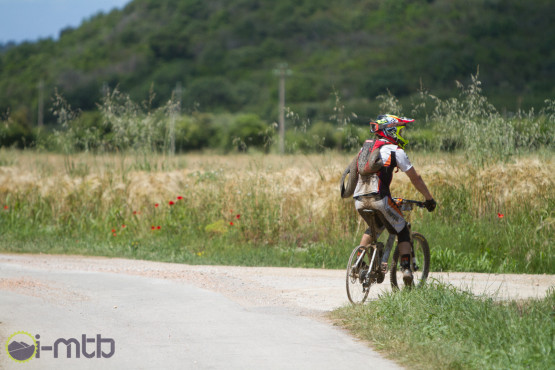 Racing is a lot about luck as well as skill. Here Alex Stock shows how his luck ran out in Punta Ala at the first Endruo World Series.

Ride in Our Trail Areas 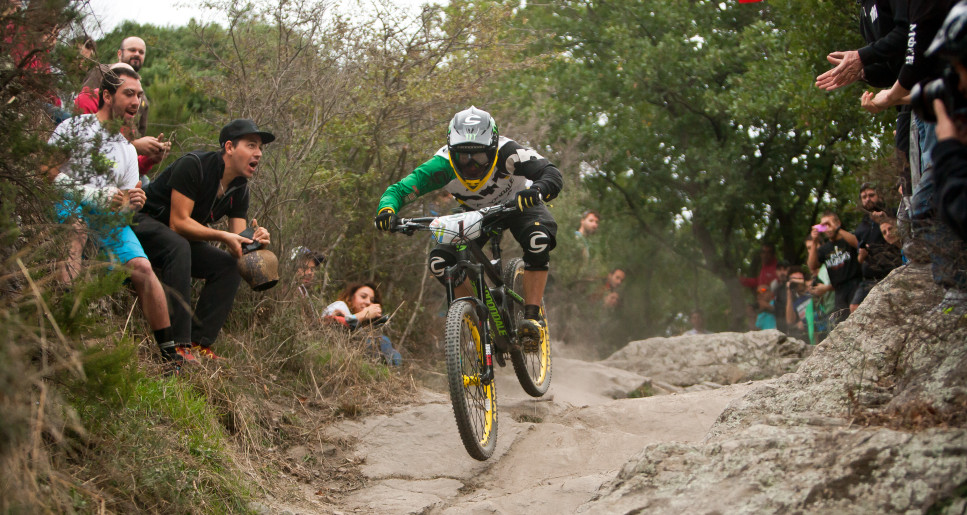