Zee is the entry level gravity based group set that was released by Shimano in the last few years, aimed at enthusiast riders who wanted strong well performing components. Saint is positioned as Shimano’s top of the range gravity component set and it is expensive stuff. Zee on the other hand puts price and performance as it’s top feature, foregoing the nice finish and lighter metals that are found across the Saint line up. With this in mind we have been testing Zee brakes from the group set on an Enduro bike for the last year. We have put them through their paces, crashes, mud, water, long descents, cross country rides and everything in between. 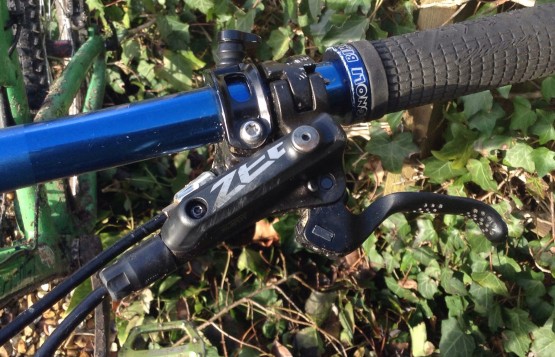 Zee brakes have no adjustment lever.

Zee brake lever and callipers are definitely built tough, slightly heavier than Saint. Weighing in at 305 grams for a front calliper. They are a 4 piston brake calliper that is designed to be used under extreme conditions and produce a large amount of stopping power. We tested the Zee brakes in their most basic form with non-icetech disc rotors and non-icetech brake pads. The brakes were mounted front and rear with a 203mm disc and a 180mm disc respectively. 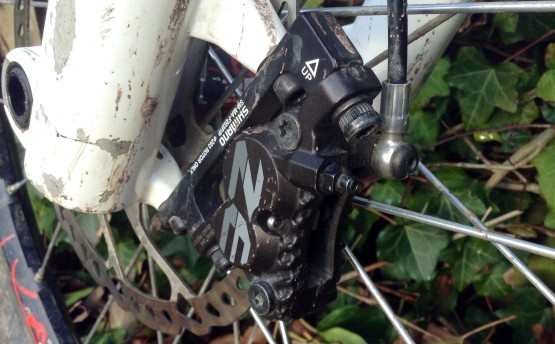 The front brake disc was mounted with a 203mm disc rotor.

The brakes were installed without a need to bleed but cables were trimmed, and a lever bleed carried out anyway. It is worth noting the Shimano bleed method though is much less involving compared to our previous brakes which were Avid. Shimano brakes use mineral oil and the air simply bubbles out of the chamber with more liquid flowing in. As the fluid is not DOT standard fluid, there is less risk with the fluid damaging paint or other components if spilled.

Zee brake levers do have a lever reach adjustment which has to be used with a 2.5mm hex key, rather than an adjustable knob, like those found on the Saint variants of the brakes. The only problem with this is that when fine tuning the lever adjustment it is necessary to carry an appropriate tool with you to do this which is more time consuming compared to the adjustable knob system.

With our brakes being used non stop for over a year we noted carefully the wear and level of maintenance that we needed to carry out. Significantly we found that during use the level feel when pads wore down remained the most constant feeling compared to other brakes we have used, with the bite point remaining as close to a constant position as that can be expected. 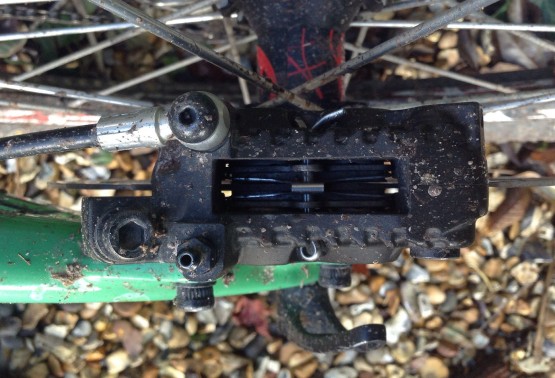 Easy replacement of brake pads is possible with only a split pin holding it in place.

Pad wear was always acceptable, and though often dictated to by the type of braking and riding conditions we always managed at least a few months of use out of a set of pads. The rear pads always wore through more quickly than the front pads as has the disc which is now noticeable thinner than the front disc. After one year of constant use including epic megavalanche descents we would say it is time to change the discs.

The mineral oil performance seems to have been good, but on close inspection the oil is now blacker in colour and it is time to draw the old oil out and perform a complete change of oil. This will help with the high temperature performance of this type of brake.

Changing pads was incredibly easy with only a split pin holding the pads in place and no need to remove the calliper from the frame, we did note though that any pisiton spreaders should be used very careful as there is a risk of damaging or chipping the ceramic pistons.

On the Trail Use

Out on the trail the Shimano Zee brakes performed incredibly well. We tend to prefer the lever as close to the bar as possible, giving a softer feel on the lever, the Zee’s coped well with this setup preference with lots of power always being available. Despite their apparent bulk and design during all the different types of riding we carried out, we started to notice if we didn’t have these brakes. No matter what the conditions there was always an incredible amount of braking power available. One of the most noticeable performance characteristics that we noticed was that after only a short time using these brakes, we started to forget and not think about our brakes and what state they might be in with regards to fade. Everytime we used them they worked, even despite some seriously long brake scrubbing on long Enduro or DH tracks. Because of this significant feeling of trust our riding probably improved as we felt more confident going into corners at speed, know that if we needed to brake the power would be there.

We used the entry level setup without the additional heat dissipation features of Ice tech discs and pads. We were completely satisfied with what we experienced, to the point that we didn’t even see the need to mount the higher performance components, which we are sure would improve braking performance yet again.

One element that was noticeable with Shimano Zee brakes was the controllability of the power. There was no sudden harshness to the application of this power, with the ability to slowly increase the power and no on or off feeling. This can be described as modulation, the brakes have a very good level of power modulation.

Even after a time with significant wearing, the brakes still stopped well and felt good, despite the fact that they were on the limits of pad wear.

Despite Â the fact these are not the top of the range brakes, the performance verses price ratio is exceptional. We believe after using these brakes there is very little need to upgrade beyond for most normal bikers and those who push the limits. Yes they don’t have an easy to use lever adjustment feature but with power available in huge amounts, when you want and reliability and as low maintenance as we can imagine with high performance brakes, there is little doubt that these brakes are the ones to get, if as a rider you are undecided and need guaranteed stopping power at all times at a great price. 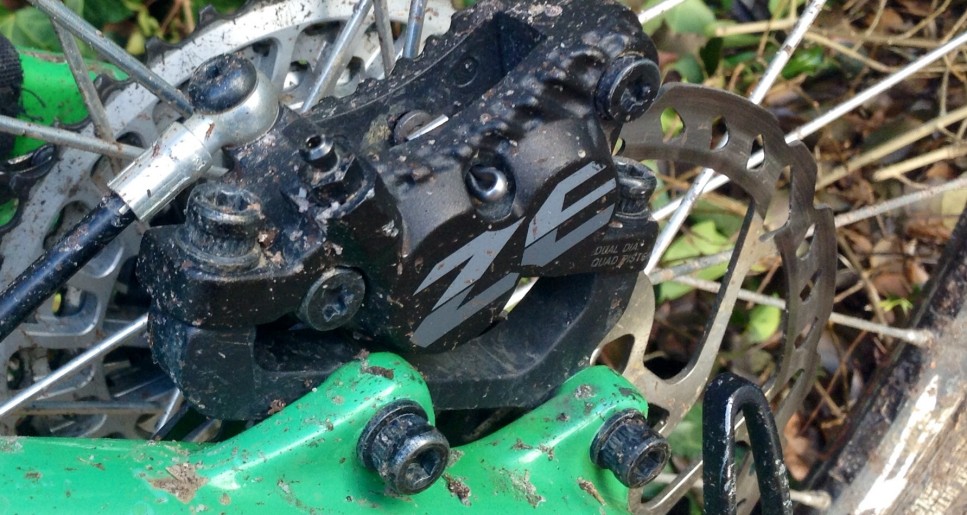