Alex Stock, with his buddies,Â Tiodoro Pene-Dâ€™oro and Germaine Teasdale beat a path to the Super Enduro in 2011, and this is what they got up to…

Words and pictures by the guys…

Now, normally weâ€™d be street drinking and doing BMX stunts but that night we found ourselves tea drinking and watching Father Ted, meticulously planning our escape from the Morzine valley for the penultimate leg of the Super Enduro Pro series. Set in Punta Ala, Tuscany, we’d heard it was ‘the real Italy’. The one with terracotta roofs spread over rugged hills and littered with 3 wheeled, baby pickup trucks. We were to leave at 2pm sharpish, so as to cover decent ground… We left at 7pm, right on schedule.

Alex Stock leading out with sat nav, avoiding toll roads but hitting every round about and small town in Northern Italy we hung on through to 4am the next morning. Riding the nicotine high delivered by the Swedish snuss stuffed under our top lips. â€˜Lads on tour, truck til’ snore.’ 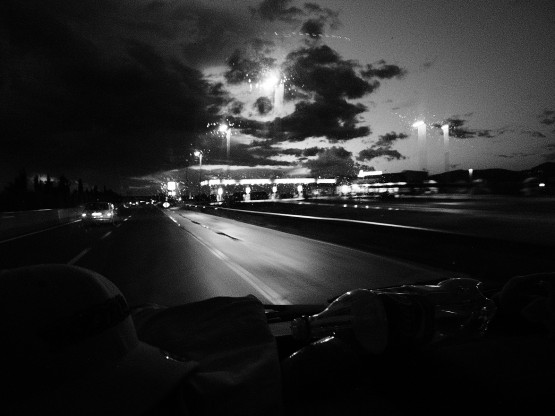 Early the following morning, sliding doors sliding open. Wherever we were, it didnâ€™t look like the real Italy. Back on road and we’re attacked by a swarm of angry Vespas, we’re definitely in Italy but have some way to go. No less than 18 hours later we pull into Punta Ala, a couple of essential stops on the way for espressos, fishing and to legally verify the lean on the tower of Pisa. Unsure we’d not come to the wrong place, we were looking for a mountain bike race but we’d driven to an area full of private beaches, apartment complexes and luxury holiday resorts, we must be in the wrong Punta Ala. 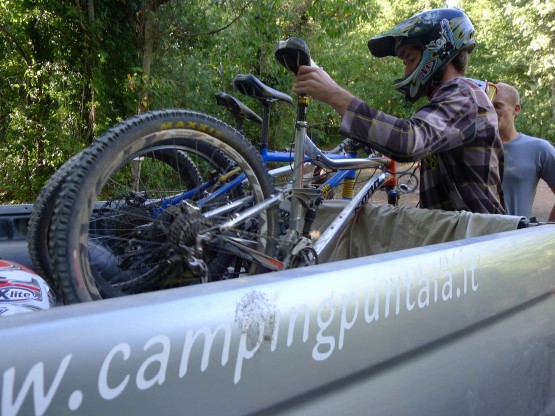 The levels of stoke rose with the sun, we were in the right place after all.Â  With Punta Ala Camping Resort and their ‘Bandite Trail Area‘ hosting the race it made sense to stay there. We got ourselves a sweet two bedroom Wendy house in the woods just 30 seconds away from the pits.

Anybody unfamiliar with the Super Enduro format should get to know. It’s a multi stage race, a big loop with timed downhill sections, each with a set arrival time at the start gate. Miss the beeps and you take a penalty, the time is added on to your overall at the end of the day. From racing Super Enduros in the past, we had high expectations. The venues usually meet key criteria; great tracks with varied terrain, fantastic atmosphere and an amazing location. Punta Ala had all three. The race pits were buzzing, right on the beach, with a pump track and a bar that backed onto the campsite. There was even a dirt jump demo organised with stallion stunt man Alessandro Barbero. 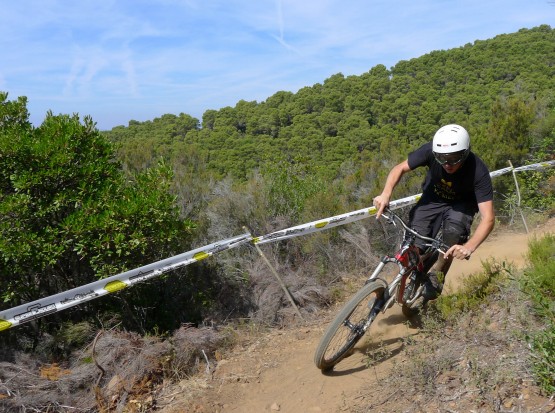 Thanks to our prompt schedule weâ€™d arrived on the Tuesday evening knowing we had a few days to practice the tracks.Â  The next morning the weather was stuck on maximum scorchio, the boys needed a brew to acclimatise. Once the kettle had stopped whistling we loaded up our VW Transporter and on racing slicks set off on a hill climb worthy of the Dakar Rally.

The timed stages ranged from flat out, flowing, sweeping single tracks where you could forget dropping an anchor, to ancient mule track, cut in centuries ago by donkeys (that could see into the future) carrying charcoal down the mountain from the burning pitches littered across the hillside, each with access trails leading to and from. Centuries of working the land in this way has created a myriad of interlinking trails which in recent years the trail crew from Bandite Trail Area have been reinstating with a two wheeled twist.

Saturday evening we had a taste of things to come with the prologue, which comprised of a short spin up the hill followed by and undulating single track decent to the beach. 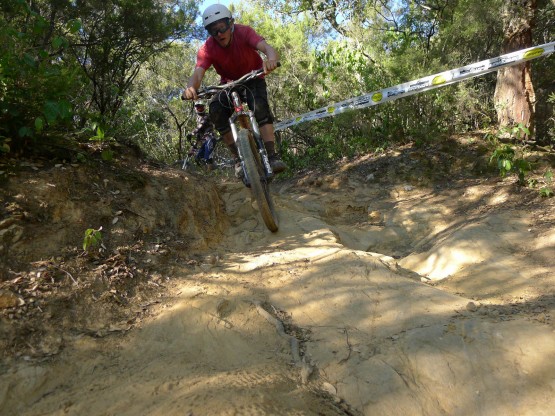 Sundays hot weather made for a gruelling race, the 1st climb was the longest of the day; even with an hour and a half to complete it was still tight.Â  Just enough time to get padded up and you’re off. Charging down tracks with relentless craggy ruts, handle bar height gullies and gaping rocky passages. The tracks were natural, loose and tight in places, with corners that were becoming heavily blown out and loose rocks falling into the track. This was nothing like a UK trail centre, lines weren’t always obvious and to ride fast you had to ride smart, reading the track as you hit it at maximum velocity. This place pushes short travel bikes to the limit.

Over five hours on the horse, it was a long day bike riding, the fastest finishing with times around the 25minute mark. Staying strong and consistent was vital, knowing where you were on the stage could make or break your run, trying to conserve energy on the climbs and not exhausting yourself too early on the longer special stages. Riders hitting the course blind or with little practice were often caught out on the pedalling sections of the tracks. Unlike a downhill race though, once through the finish line you had no time to reflect or worry about lines you didnâ€™t hit, time is still ticking and you have to pedal yourself back up top before it all starts again.

The organisation at these events is rock solid, with more marshals than you can shake a whistle at, all equipped with radios on the well taped out courses. Food stops scattered about the place on the clearly marked climbs are a godsend. The timing is impeccable and probably the only thing that actually runs on time in Italy. Race director Franco Monchiero, the dude with the cigar, loves a good front flip but leaves Enrico Guala who seems to speak every European language under the Mediterranean sun, to keep the stoke simmering all weekend with his microphone. Thereâ€™s always an amazing atmosphere and we spoke plenty of pigeon Italian to our fellow competitors and new friends on the way up between each stage. 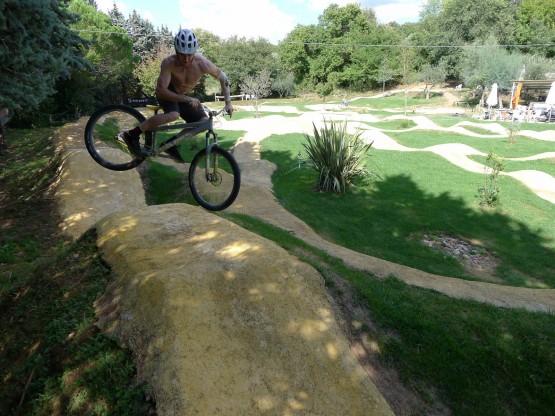 Leaving Italy is proving to be a struggle, we went straight from the race to a near by hotel, Massa Vecchia, host to one of the most impressive pump tracks we’ve ever seen. Set in the shadow of Medieval marvel Massa Marittima it’s a bicycle hot spot in it’s own right. More coffee breaks, fly fishing sessions, and dash board pizzas later weâ€™ve made it as far as San Remo, to the home of the bull dog breeder, local pinner, guide, BBQ-bad-man and fellow Super Enduro racer Manuel Ducci and his girlfriend Valentina Macheda of Life Cycle Holidays. We may outstay our welcome… it’s not long until the Super Enduro finale in Finale Ligure!

Summer’s dead but Autumn’s cooler. Italy is but an easy jet away and the trails will be dry here when the big freeze goes big time in the UK.

This shit’s the future. 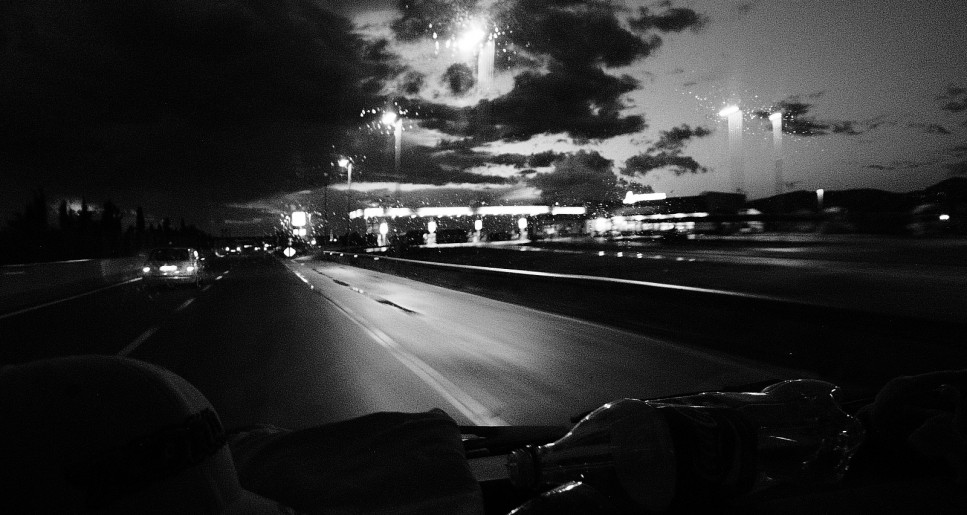